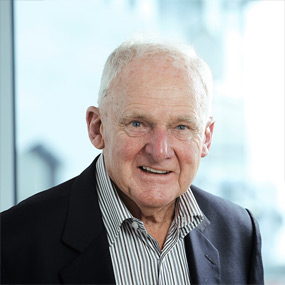 After 51 years in the law, 44 of them as a principal, Bob ‘retired’ and became a consultant to the firm on 1 April 2002. The retirement has been in name only and he remains as professionally active as ever. As he says to anyone who will listen, the habits of a lifetime die hard.

Bob was an Auckland District Law Society Council member between 1978 and 1987 and President in 1987-1988. He was a Council member of the New Zealand Law Society from 1985 to 1989 and a Vice-President in his last year. Bob was appointed a Distinguished Member of the Auckland District Law Society in 1998. He still has a number of Law Society and related interests, For sixteen years he was a presenter/assessor for the New Zealand Law Society’s Trust Account Supervisor programme and he still tutors applicants for appointment as a Notary Public.

Bob specialises in property, commercial transactions, trusts, wills and estates. He has a particular interest in professional ethics and practice and is often called upon to give expert evidence and provide opinions in those fields.

He still has a number of Law Society and related interests. He acted for sixteen years as a presenter/assessor for the New Zealand Law Society’s Trust Account Supervisor programme and tutors applicants for appointment as a Notary Public. He is a Fellow of the Australian and New Zealand College of Notaries and was appointed a Distinguished Member of the New Zealand Society of Notaries in 2016.

In his spare time, Bob enjoys tennis, walking, reading and his family.